WHERE TO FIND US

Kilwaughter Castle is private property and is not open to the public except on Open Days.

Please check our Events Page for access on Open Days

Our mission is to educate, promote interest in, and advocate for the preservation of the historic castle of Kilwaughter. Caring for the past, building on skills for the future, bringing recognition to the region on the significance of local heritage, thereby raising awareness and attracting economic opportunities.

The original building known as Kilwaughter Castle was a four storey tower house in the Scottish Baronial Style. With a T-shaped layout, the tower house would have been incorporated into the main bawn wall for defence typical of new buildings erected during plantation era Ulster. In fact, many new planters received orders from the English court to build a stone house in the English style and surround it with a protective bawn wall, as part of their land grants. The bartizan turrets visible on the oldest part of the castle, are a common feature of the Scottish Baronial Style.

The original structure was constructed around 1622 by Patrick Agnew. Through time, the fortunes of the Agnews increased significantly and they enjoyed a position of power in the local and wider areas. During this time architectural fashions also changed, and the typical English style mansion came into vogue. Thanks to a period of relative peace in Ulster, social stability increased and the defensive tower house and bawn of the 17th century was no longer seen as a necessary or indeed a comfortable place to live.

In 1806, with his acquired wealth, Edward Jones Agnew, a descendent of Patrick's, ordered the first major extension of Kilwaughter Castle. The famous, and occasionally infamous architect John Nash (1752-1835), was hired to complete the designs. Nash is more famous for his development of Regent Street and the plans to transform Buckingham House to a Palace. Edward would have seen evidence of Nash's work first hand, not in London, but at William Stewart's newly constructed mansion: Killymoon, Co. Tyrone. Stewart was a cousin to Agnew and is likely to have made the introductions between Agnew and Nash. Killymoon Castle

During the 19th century, further embellishments were added to the castle, including an octagonal tower and glass roofed library. Much like today, those who could afford to enhance their buildings did so. Today the purpose of many building projects usually involves increased comfort and luxury. However, in Early Modern Ulster, many of these projects were as much to show off the wealth and importance of the family. These buildings and their designed landscapes had a social purpose as well as a being a home for the family. If a family could display their wealth and fortune they marked their place in the social hierarchy. On some occasions this increased their chances of attracting tenant farmers to work their land. 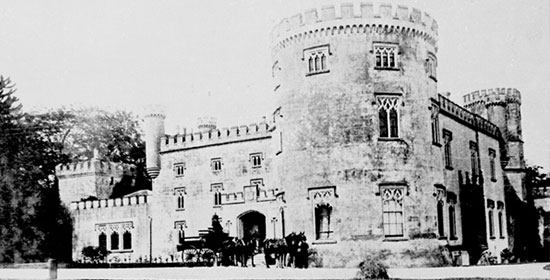 The building has undergone many changes over the past 400 years, and by the late 1800s was rented to American socialite, Elizabeth ‘Bessie’ Bringhurst Smith. During her 30 year lease of Kilwaughter Castle, Bessie made her own alterations to the interior of the building,altering the décor and use of the rooms on many occasions. Arriving days before the beginning of the First World War, she was to remain at the castle for the next four and a half years, documenting her time by writing nearly 700 letters home to America.

Unfortunately, post WWII, having seized the castle from the owners, the Balzani family, due to their Italian connections, the castle was sold by the Government to a scrap merchant. The building was stripped of its lead, its roof, and interior fixtures such as fireplaces, stair cases and window sills. Thanks to photographs taken in the early 1900s, it is possible to see the castle as it once was, which provides a point of reference which can be used to aid in the conservation and partial refurbishment of the castle.

Plan of 17th century tower house based on Jope 1956: 126. The four stories are clearly visible, as is the turret, similar to Ballygalley Castle, Co. Antrim

Kilwaughter Castle Restoration Group was formed in September 2015. Now in 2017, in order to safeguard the future of the Castle a Community Trust with charitable status is being set up. The Trust’s aim is to stop further deterioration of the Castle, promote its fascinating history and make the building a source of pride for the local people and the Larne area. With the support of so many individuals and groups the restoration of the Castle is now becoming a reality.

Caring for this historic place and making our collections and archives accessible to as many people as possible for the benefit of this and future generations is our goal.

We are very grateful for the resources available through the Ulster Architectural Heritage Society (UAHS) From planning stages to general guidance on our restoration project, information and assistance has been invaluable.

UAHS works to promote the historic environment, encouraging the conservation, restoration and re-use of Ulster's built heritage to regenerate and sustain communities. In partnership with the Department for Communities (formerly Department of the Environment) UAHS has produced a comprehensive Built Heritage at Risk Northern Ireland Register, (BHARNI) for over 20 years. The online BHARNI Register can be found at: http://www.uahs.org.uk/

Through the BRICK programme The Prince's Regeneration Trust are providing assistance for our restoration project with a series of workshops, advice and mentoring. Workshops began in September 2016.

With a wealth of expertise in helping communities achieve their goals of saving local heritage, and developing sustainable plans for future uses for buildings, The Prince's Regeneration Trust are working closely with the Restoration Group and the local Kilwaughter community.

To find out more about our Restoration Plans and our current projects, Please visit Support Us